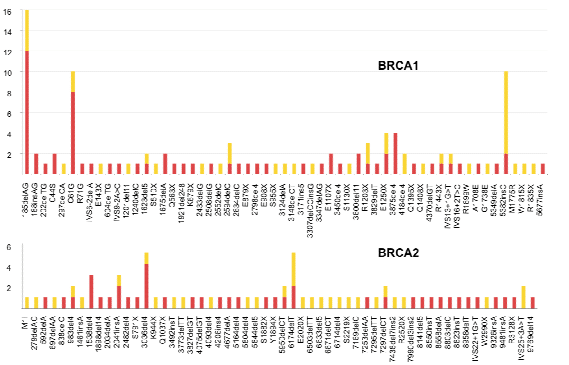 According to recent research by a team of scientists based in the United Kingdom, men with the BRCA gene mutation face an increased risk of prostate cancer. For this reason, researchers are advocating prostate cancer screening for men with this particular gene defect, despite criticism of this type of cancer screening, particularly with the Prostate Specific Antigen (PSA) test.

Does PSA Screening Cause Unnecessary Alarm?

In earlier studies, it was found that the PSA test is generally not an appropriate test for prostate cancer screening in males. There are several limitations to the test such as overdiagnosis, false negatives, and false positives. The test has also been known to highlight slow-growing tumors that may not ever become life-threatening, thus potentially causing unnecessary emotional distress to the individual. However, while PSA screening may not be suitable for the general population, research now indicates that PSA tests are useful for a specific group of men: those who have the inherited BRCA2 gene defect.

Defects in the BRCA1 and BRCA2 genes have long been linked to an increased risk of breast and ovarian cancer in women. The BRCA2 gene defect has now been discovered to increase the risk of prostate cancer as well. Although it is not yet known by how much the risk is increased, around one in every 300 men may be carrying the gene defect, and some of them will develop prostate cancer, which can be particularly aggressive form of the disease. Cells with defective BRCA genes are not entirely able to repair DNA damage sustained on a daily basis. As the damage progresses, these cells become increasingly vulnerable to tumor growth. Until now, men would generally only get tested for the BRCA defect when they had a family history of breast cancer and were concerned about passing the gene to their children, especially when they have daughters.

A total of 357 men tested positively for PSA levels higher than the prescribed limit and were subsequently given a biopsy. Of these men, 112 were diagnosed with prostate cancer. It was discovered that the men with the BRCA2 gene defect had the greatest risk of cancer—5.2% of them were diagnosed with prostate cancer, and most of them had tumors with an intermediate to high risk factor. Only 3.4% of those with the BRCA1 mutation received a positive diagnosis for cancer. The two groups who tested negative for both BRCA1 and BRCA2 gene defects had the lowest diagnosis rates.

Based on these findings, a statement was issued by Ros Eeles, the lead researcher in the study. Eeles is a representative of the London Institute of Cancer Research. The statement called on regulatory bodies to update their guidelines so that men over 40 years of age who have the BRCA gene defects, and particularly those with the BRCA2 mutation, would be urged to get annual PSA screenings.

Specialist groups in the United States recommend that doctors begin speaking to patients aged 55 and older about the potential benefits and drawbacks of PSA testing. Recommendations are being amended so that PSA screening focuses on groups that are younger but are considered to be higher risk. Carriers of the BRCA2 gene defect are widely recognized as being in the highest-risk category.

Who Should Receive PSA Screening?

Based on these recent research findings, men who fall into the following categories should seriously consider going for PSA screening:
• Those who have prostate, breast, or ovarian cancer in their immediate family history.
• Men with family members who have tested positive for either the BRCA1 or BRCA2 gene mutation.
• Those who are of Ashkenazi Jewish descent. BRCA mutations are common in this ethnic group.

These studies are particularly important to us at the Northern Charitable Foundation as we work together with the Israel Cancer Association to promote BRCA Awareness.